Dr. Singhvi said the Modi Government is indulging in cyclical economics. ONGC and HPCL merger is a classic case of accounting jugglery and will only add to the rising fiscal deficit. It is another way of using left-hand right-hand slieght of hand to largely fool the Indian public.

First the Modi Government has reaped a wind fall gain of almost Rs. 6 lakh crores, is the gain it has had by sheer taxation of Petrol and diesel namely if it had passed on the benefit to the public of India of the actual international oil prices at which India imports which is the price given to Indian public either directly or by subsidy. Then the Indian public would have gained by Rs. 6 lakh crores. Instead the Modi Government has taxed and collected tax from Indian public of Rs.6 lakhs crore and has not passed on the benefit of low prevailing international prices for over 3-1/2 years to the Indian public. On the one hand, international prices and declined and declined to a low of 47 odd US Dollars, it is has not come back to some 62 US Dollars. During our time, it was 110 US$. At one time even at 150 US$ and yet while the international prices are in the ranges of US$ 45, 47, 50 and 62 , the Modi Government has not passed on that benefit and prices are falling but prices of petroleum products in India are rising.

Fourthly, what is the change on the ground? Does it really have a change in the ground? On the ground, the HPCL which is either a refinery agency or a trading agency in oil remains the same. On the ground ONGC remains the same, it is an exploration agency, oil extraction agency. All that will happen is that HPCL instead of independent company will become either a department or a subsidiary of ONGC. What synergy is achieved by this? Nothing but jugglery – if ONGC and BPCL had synergies, then for the last so many decades, why was ONGC and BPCL separate companies because they do different activities and they were continue to do different activities. Only difference is that ONGC will own BPCL. That is all that will happen – why Shri Modi’s Government wants the balance sheet to look better that Government of India has not borrowed plus we have fulfilled our disinvestment target.

My question to you is fivefold – is this chicanery? Is this virtually pulling wool over the eyes of the Indian public? Is it trying to make fool of the people of India by suggesting that they eat grass? Is it an attempt to do accounting jugglery, is it an attempt to do left hand-right hand jugglery, transferring from left hand to right hand. These questions arise; these five questions arise in the context of five issues I have summarized – issue No. 1 – you have simply directed the ONGC to buy shares of HPCL so the Government of India is shown to have met its disinvestment target. This disinvestment means disinvestment to ONGC. Was this the meaning of disinvestment?

Secondly, you are forcing ONGC to do borrowing of Rs. 30,000 crore so that the Government does not have to borrow.

Thirdly, you are likely to have, according to Morgan Stanley report, a fiscal deficit of 3.5% of GDP over shooting the Budget Estimates of 3.2%.

Fourthly, you have not passed on a penny of the benefit of reduction of oil prices by way of reducing petrol and diesel prices to the people of India who continue to reel under the highest diesel and petrol prices virtually in the whole world. In this difference of the International price and the price at which it is sold to the Indian public, the Government of Modi has pocketed Rs. 6 lakh crores.

Dr. Singhvi said have you heard what is the prices of petrol Rs. 71 per liter, Rs. 62 or 63 per liter diesel – we have demanded officially many times that one of the worst ways you have distorted GST is not to accede to our demand of bringing GST. What is this talk about One Nation-One Tax? You have got a Nation with petrol not even one tax, two tax, three tax, out of the tax system altogether of GST. If you had GST, could you levy Rs. 71 and I include Diesel also in it. This is another very bad form of chickanery.

On the question that the Finance Minister of the Congress Party did not include petroleum products in the GST, Dr. Singhvi said, well we all know Mr. Modi opposed GST tooth and nail strongly. From day one, when this Government came, we had been demanding petrol, in fact even alcohol, real estate should be there.

Thirdly, it is highly premature to speculate on alliances. It is not a subject which I want to hypothesize or speculate and last but not the least certainly issue based support, issue based support in every sphere in and outside the Parliament is something which we have seen actively going on. Why should we react on premature subjects like alliances today?

On the question whether the Congress Party endorses or supports the movie ‘Padmavat’, Dr. Singhvi said I am not required as a political party, and sitting here at the podium of the political party, to endorse the movie at all. I am not required to endorse it in any respect whether it is expression of ‘a’ or ‘b’. Different people in a democracy and must do have different views and I do not have any doubt that I will support your view to hate the movie and you will support my view of loving the movie, those are parts of democracy. The point I am making is very different. This debate has ended and this debate must be deemed to have ended till such time as the Supreme Court modifies its order. Under our system of governance, a Supreme Court howsoever wrong, has to be obeyed and if read   Article 141, 142 of the constitution, every agency of the country even a Police constable had to act in aid and in support of that order. This is a debate which has no end if we start applying this principle of anarchy, we will be deemed to be banana republic. It is our proud democracy and I think anybody’s likeness or dislike-ness, freedom or not freedom or absence of freedom is irrelevant. It is a question as per Apex Court’s order, each one of us irrespective of political colour is bound to do it. 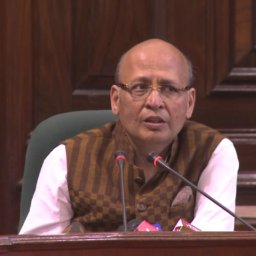