Arguments made by Dr. Singhvi in Sabarimala case in the Supreme Court

He opposed the contention that the reference is not maintainable since the review is pending.

Dr. Abhishek Manu Singhvi aarguef that the Counsel arguing against maintainability of the reference have the burden on them to show that there is an express bar on the Court from entertaining such a reference; there isn’t any such bar.

He told the Court that the constitution bench (with one judge changed) had convened to decide whether the September 2018 needed to be reviewed and if there was an error apparent. The review bench makes a reference to a larger Bench for guidance on account of want of answers on larger issues.

He added, once the reference is decided by the larger Bench an guidance provided then the review goes back to the same review Bench to decide whether there was an error this way or that way.

He asked that in the steps enumerated, where is the bar on a Constitution Bench from referring a question for guidance to a larger Bench. It was argued that this is an intra-Court appeal and that reference can’t be made merely because review is pending and that’s why guidance cannot be sought and the main arguments advanced by the other side opposing the maintainability of the reference.

Most important thing that is being forgotten is that the request for guidance is made by a Bench and the guidance will be an input for the decision of the review… Saying that the Supreme Court cannot seek guidance of a larger Bench for deciding a matter is subversion of the majesty of this Court.

On the application of Article 145(3), Dr. Singhvi said that the same applies to Benches of strength less than five Judges. In the instant case, the reference is made by a five-Judge Bench. Neither Order 47 of CPC nor A.145(3) of the Constitution impose any bar on the Court; a bar is being read into and an ouster cannot be assumed.

He argued that the Supreme Court also has an inherent power on account of which there cannot be a bar. Over 90% of the cases concerning Articles 25 and 26 arise when an aggrieved person challenges the statutory provisions of statues governing religious bodies. A strange trend has begun where a PIL is filed in the absence of a statute and an alleged bad practice is sought to be banned. The aggrieved persons in such matters become the Respondents.

Dr. Singhvi cited the example of Navtej Singh Johar case which was entertained despite the dismissal of review petition in the Naz Foundation case. The Curative petition in Naz remained pending at the time.

He said that the situation is “identical” since in Sabarimala the reference is made pending review, in Section 377 case, reference was made pending curative in Naz Foundation case. After the decision was rendered by the five-Judge Bench in Navtej Singh Johar reading down section 377 of the IPC, in September 2018, the curative petition in Naz Foundation case was withdrawn. 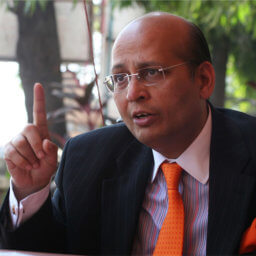