By hook or by crook – more by crook and less by hook.Prevention of Corruption Act says any public servant receiving any gratification with any motive or reward for doing or not doing something in return for the gratification.In 1985 the Xth Schedule constituted by the Parliament says about political defections which “undermine the foundations of our democracy”.

Unprincipled defection is a social and political evil. This is an awkward erosion and a grotest manifestation which is the bane of our times.Now a days, we have fallen to the morass of a personal and political degradation which is why the evil, the Constitutional sin or defections must be stopped.Voluntary giving up of a Membership in any form is defection. 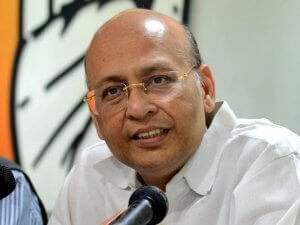 Dr. Singhvi said undermining and subverting the authority of an elected Government has become the hallmark of BJP. The BJP believes in shamelessly denigrating, decimating and deprecating every Institution of democracy and those Institutions include Assemblies, Parliament, MLAs, MPs and all the Constitutional provisions against corruption and defection.

Dr. Singhvi said we have seen in the recent past lectures on morality and anti-corruption, which are in inverse proportion to practice by the BJP and the NDA. Their words and deeds have a difference of the sky and under world. Their preaching and practices are completely divergent.

You have seen it in Goa having lost the peoples’ mandate; every possible attempt was made to gobble a Government by undemocratic, illegal and immoral means. The same story was repeated in Manipur. This great Bihar lecture though we have been receiving whereas actually it is a conspiracy and collusion between our Prime Minister and a person seeking continuous sixth term CMship, Mr. Nitish Kumar.

Let me summarize quickly the two vital issues that are small issues but vital issues of corruption and of defections and they go together.Our colleague held a Press Conference in Gujarat today at 3.30 pm that Crores are exchanging hands for blatant day light changing of loyalties and defections in the most brazen misuse of ‘Dhan-bal’, ‘Bahu-bal’ and ‘Satta-bal’.

Now, in case those MLAs are not made aware by the people who are trying to bribe them, apart from money, my offer to you as a public servant , a sitting MLA to resign his seat in exchange for a future seat is itself corruption because the language of Section 7, 8 and 13 of the Prevention of Corruption Act is ‘any public servant receives any gratification in cash or kind as a reward or a motive for doing or not doing or forbearing to do. So a public servant namely an MLA receiving the offer and promise of even a ticket to leave his Membership is a corrupt act and all the Sections will apply in addition to conspiracy charge of 120-B of the IPC.

I do not know if these MLAs who are trying to be very brave on the advice of BJP are being made aware of the consequences of 7 to 10 years punishment under the Prevention of Corruption Act. But even much more serious is the Anti-Defection Law the Xth Schedule brought in 1985, the statement of objects by Parliament said, the evil of political defections which must be stopped like a scourge because it undermines the foundations of our democracy. Repeatedly the Constitution of India and more importantly Hon’ble Supreme Court in diverse judgments has called it a ‘Constitutional sin’.

Now 2-3 very interesting aspects – one – if you give up Membership of your party voluntarily, that is defection. If you cross vote, that is defection. If you act contrary to the whip of the party, that is defection. If you do any act contrary to the interests of the party like hobnobbing with other parties, that is defection. It does not require formal resignation. Now defection, it is all very well for these people to be befooled and trapped by the BJP, by Shri Amit Shah and Shri Modi. However, were they told by Shri Amit Shah and Shri Modi that if they are disqualified, if the Xth Schedule is applied by a Court of Law, on our complaint, and after three to six months or even a year, if the MLA is disqualified for 6 years, after that he cannot hold any elective office? He can’t fight an election, he can‘t be MLA or MP. Have they been told of these criminal consequences?

In Ravi Naik’s case, from Goa, the Court clarifies that voluntarily giving up Membership in any manner or in any form constitutes defection. It has a very wide connotation. Now another very interesting aspect – an amendment was brought to this law in the interest of anti-defection. The Amendment was that in Rajya Sabha election in particular, where an MLA casts his vote, the voter must show i.e. the MLA must show his vote to the Chief Whip of his party or to the authorized official of the party.

Shri Kuldeep Nayar challenged it saying this is violation of confidentiality of the vote. The Hon’ble Supreme Court upheld such a drastic provision on the ground that the Constitutional sin of defection requires higher premium even higher than the confidentiality of the vote and therefore, today those MLAs who will defect, not vote, leave their Membership, join another party, cross vote or hobnob, all of them are liable under defection law, which means for 6 years they cannot stand for office, they cannot be MPs or MLAs. I hope and trust that these severe consequences have been made known to them by those who are trying to subvert democracy by those who has DNA to subvert Institutional and Constitutional democratic Institutions.

On the question whether the Congress Party will invoke anti-defection law, Dr. Singhvi said we reserve all our rights. This is only the beginning. The election is still 8–10 days away. I am telling you the true contours and boundaries of the dangerous game being played by the BJP upon MLAs who may be relatively innocent or unaware of the drastic consequence. As far as invocation and action is concerned, let me assure you all options are open to us, none are closed.

On the reaction of the Congress party on the statement of Chief Minister of J&K today in Delhi, Dr. Singhvi said the divergence of opinions between these two coalition partners and the Centre and within the partners, is so great as to be like the sky and the bottom of the ocean. This is just a camouflage of words to hide their difference. What the country wants, what the principal opposition wants, is an answer on the substance, not on words which camouflages this difference.

Today, it is an open secret that not a single policy of the Central Government currently underway is accepted or implemented in a genuine spirited sense by the J&K State Government. They believe that questions are different and answers must be different. In this terrible-terrible divergence, who is suffering – the most vital part of India and India and every Indian.

On a supplementary question on Panama Papers and Zero tolerance on corruption claim by Shri Narendra Modi, Dr.Singhvi said zero tolerance as far as mere allegations and FIR qua opposition only. However, 100% tolerance is qua non-opposition leaders who may be in the same list with the same charge. 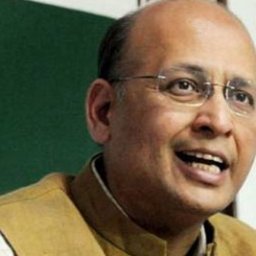 Congress’ Abhishek Manu Singhvi comes out to support MS Dhoni’s right to sport the ‘Balidaan Badge’ on his glove at the World Cup, takes on the ICC