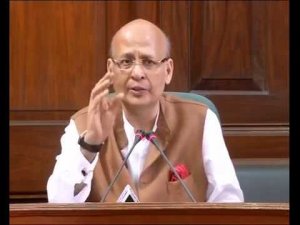 Dr Singhvi said this is not a small matter, it is not a matter of Gujarat and Himachal Pradesh alone, it cuts at the root of several fundamental constitutional principles.

Firstly, it is the grossest interference with a constitutional body – the Election Commission of India, which has earned much respect globally. It is a direct interference by this Government in a shameless manner.

Secondly, it violates something which the Hon’ble Supreme Court has repeatedly called the basic structure of the Indian Constitution because free, fair and unbiased elections have been held to be a part of our democracy and democracy with free, fair, unbiased elections has been held to be part of our basic structure. That is as far back as 1975 in a popularly titled judgment called Indira Gandhi Nehru Vs Raj Narain – a Constitution Bench.

Fourthly, facts tell you that the BJP, firstly is trying to convert an Election Commission into an ‘Election Omission’ and that is not my phrase, my copy right, it is what you have in fact already noted. A drowning man is desperately clutching at the straw of a Constitutional unit called “The Election Commission’. ‘डूबती नाव को चुनाव आयोग के तिनके के सहारे ये पार्टी और सरकार अपनी सत्ता को बचाना चाहती है

We have the figures here which show that except for 2002 and 2003 when the riots disrupted all normal governance and the riots have their own story against the present Prime Minister and several BJP Leaders. Except for that one year, these two – Himachal Pradesh and Gujarat – elections have always been held in tandem. It has been so in 1998, so in 2007, so in 2012 and would have been and should have been so in 2017 !

Thirdly, a series of falsehood excuses, clear attempts to fool you and feel you like children who eat grass as if not responsible citizens are being trotted out minute-by-minute, day-by-day. And they are so laughable, they would be laughable if they were not tragic for this country – one excuse is that we have to have polls namely the Model Code of Conduct should not exceed 45-46 days. Now are you being told that in 1998, for Gujarat and for Himachal Pradesh, these 45 days was 67 days? 2002-03, which we are not counting, was also 49 days for Gujarat, 50 days for Himachal Pradesh. 2007 – 74 days for Gujarat, 79 for Himachal Pradesh. 2012 – 79 days for both Gujarat and for Himachal Pradesh. What happened to this great 45 days mandatory unalterable written in stone limit, I don’t limit. Remind me of English saying – Show me the face, I will show the rule. The rule will change according to the face changing.

Another nice excuse trotted out. There are innumerable States, in the last 15-20 years where this 45 days rule which is now trotted out both by the Election Commission and by the Government of India and by Modi Ji’s ruling Party has been never observed. It was not observed in Delhi elections, in Mizoram, Rajasthan, Maharashtra and Arunachal Pradesh and Andhra Pradesh Elections.

Then, if Himachal Pradesh residents are also citizens of India, did the Government think for a moment that they will poll and vote on 9th of November but must wait till an unknown, undisclosed date till middle of December or even later to get the results – just to please Modi Ji and the ruling BJP. Are Himachalis not citizens of India or they are second class citizens of India, that too to satisfy the whim and caprices, the arbitrariness of this ruling Party and this Government, they must wait endlessly from 9th November to an undisclosed date in the middle or end of December. Then, yet another reason is pointed out – floods in Gujarat – of course, they assume that your memories are not existing or everybody is a fool that floods in Gujarat happened in July 2017 and if you could not cure floods in Gujarat from July 2017 to October 2017, then which magical wand are you going to cure it by the end of October or early Nov 2017. Surely the Gujarat election will be announced by early November 2017. By magic wand of Shri Shah and Modi in next 15 days, the flood problem will be cured. We have heard at least 89 sermons from the Hon’ble Prime Minister and an equal number from all his major functionaries about the vital importance of simultaneous elections in this country. Without telling you how ‘No Confidence Motions’, how 23 States and such a big country will have simultaneous elections without massive Constitutional Amendment and with no All Party consensus but we have had sermon after sermon for last days on their favourite topic. So much about simultaneous elections requiring such a huge constitutional amendment and you do not want to have simultaneous elections in Himachal Pradesh and Gujarat which you will be having every election since 1998 except 2002-2003. Is this sincerity, is this honesty, and is this truth? If you want to be Santa Claus, and Santa Claus is a very revered saintly person who does good, fake Santa Clauses who break the hearts of children are not good people. Fake Santa Clauses, who cheat people are not considered good in any theme. If Shri Modi and his Government wants to be a series of fake Santa Clauses going across Gujarat then why should the people of India suffer and why should not they stand exposed . Why do I fall in Santa Claus?

This is very serious, I would fall actually call there is a concept of collective bribery; this is an attempt at collective bribery. On Thursday, obviously in tandem, with deferred and delayed dates of elections – Thursday was yesterday 12th of October – a series of sops are announced for Patidars’ community, Valmiki community, in respect of lakhs of Government servants, and most interestingly the Ahmedabad Municipal Corporation about an hour or two hours before, the Election Commission strange announcement of Himachal now, Gujarat, we will announce later about a couple of hours before that clears proposals of Rs. 550 crores in less than 10 minutes. This is bribery, this is collective bribery or at least attempted bribery and here we have our Hon’ble Prime Minister telling you so much about morality, about Swachhta of thought, deed and action and everybody in BJP was like three statues of Gandhi Ji – who saw evil, did no evil and heard no evil.

This is something which intersects on morality, on ethics, on law, on constitutional law, on basic structure of Indian Constitution, on level playing field, on the very foundations of our democracy and for short term cheap political gain, should never ever been attempted by this Government. After all we have also won many elections, we have lost some elections. The BJP may be in power today, somebody else will be in power tomorrow but this is the not the way to erode and assault and ultimately eliminate the foundations of our constitutional principles which is precisely what makes us different from each of our South Asian neighbours. Each of our South Asian neighbour reflect the wrecks and ruins of constitution. We are a proud shining exception and it is that proud shining exception which Shri Modi and his team are flagrantly and shamelessly demolishing.

On a question related to the amendment, Dr. Singhvi said constitutional amendment to amend the basic feature of the constitution and saying that an election in India can be held on a non-level playing field, would be unconstitutional even if passed by 2/3rd of Parliament. So what more bigger threat to democracy can there be, if you, the Government of India, for petty short term political gain, start interfering with some constitutional Institutions, which are the pride of the Nation and which other countries want to hire our Election Commission.

On the question of the Central Government drafting a policy to do away with Haj subsidy, Dr. Singhvi said, “I do not want to comment till we see the whole draft. If it is a non discriminatory policy, if it is a fair policy, if it takes into account all the expectations and legitimate expectations of all communities and most importantly applies to all communities in not discriminatory manner, we can look at it but if it is done by malicious, which a lot of Government of India policies are actuated by, then of course we will raise our voice. Let us see the full contents of the policy.

On the question of the reaction of the Congress Party on the statement that the Spokesperson has said “Election Omission of India’, Dr. Singhvi said that every possible and all possible options are available : legal, political and social, none is closed. One does not under cut the other; one does not undermine the other. On the contrary different options exercised have synergy, have a conversions. Now which we will use and in what manner, is not to be discussed today but certainly the primary amongst all these options is to make the people of India through you, aware of the various facets of this problem of this issue which I have done today.

On the question as to who asked for the registration of the CBI case, Dr. Singhvi said I don’t want to digress but I want to remind those who have short memories, this is yet another BJP ploy to keep the pot boiling without telling you either the facts or bringing anything to conclusion and I want to take less than a minute because it is a far too large a topic and I have a quiz, mock quiz with you to jog your memory. Who asked for investigation – CBI, ED and IT and when ? who asked; you failed the Quiz. In 2012, 2013 Congress asked. Question No. 2 – who directed registration of CBI case – this time you will not fail the quiz because you know the answer 2013 February. Congress ! in Augsta or ED for IT or CBI. Who issued a Show Cause to Augsta to cancel the contract – Congress February 2013 ! Who sent a letter rogatory to Mauritius, Tunisia, Italy and when – UPA Government July 2013. Who on the floor of Parliament, I opened the Augsta debate in Rajya Sabha on the floor of Parliament Who made an offer to have a JPC ?  Answer is Congress. Who  en-cashed two bank guarantees of Augsta Rs. 240 crore that is only thing we had – Congress and so on and so forth.

You may win the quiz because I had it out to you but you have to make sure that the people of India realise the true answers of this quiz. We will hand this over to you. What you are saying Madam is nothing, is last hair on the tail of the dog which is why it is being vexed to give a pot boiling. No concrete action has been taken by this Government for three years – only these kinds of reports that we have filed this, we have filed that.

On the question that Kerala Government has closed cases in ‘Sohardya’, Dr. Singhvi said I don’t think it should be dignified with a response. It is ridiculous to make charges like rape against a former Chief Minister. There has to be some sense of balance in this country. Just because you are in Government and you have changed the party, you may make this,. I have no doubt that then courts will take appropriate action to quash such false, malicious and frivolous accusations. I think the people of India understand that a man like Shri Oomen Chandy is accused of these things. Not a single person believes because the Government is there, what can we do?