Dr. Singhvi said – so, friends, in a nutshell, this is a ‘Jumla’ sarkar, a ‘Feku’ sarkar, this is a Sarkar of deceit, treachery and of trying to fool all the people all the time including institutions like the Supreme Court. I think the writing is on the wall before them and they shall see it not too much later.

May I add one thing before you ask the questions – are we entitled or not entitled, I ask you and my answer is Yes to seek the resignation of a exalted Ministers like the Defence Minister and the Law Minister who have tried to suppress these documents by calling them stolen documents and so instructing the Law Officer of the court to argue. Today when the Court has held that these are documents from the (a) file – so stolen does not mean it is fabricated. Stolen does not mean that I have made them up or I have forged them; (b) these are in the public domain and were tried to be suppressed by you by calling it stolen. You were not before media, you were not before me, you were not even in elections, you were before the Supreme Court. So is it not an act of deceit to say to the Supreme Court and seek to suppress by recharacterizing them as stolen and therefore, I think the resignation of people who called them stolen and repeatedly asserted they were stolen should be called for, should be in order.

Dr. Abhishek Singhvi quoted the MHA statement– “MHA has not yet received any letter regarding the alleged breach in security of Congress President Shri Rahul Gandhi.  However, as soon as MHA’s attention was drawn to reports that there was an incident of “green light” being pointed at him yesterday in Amethi, the Director (SPG) was asked to verify the factual position.  Director (SPG) has informed MHA that they have gone through the Video Clipping of the incident very closely.  The “green light” shown in the clipping was found to be that of a mobile phone used by the AICC photographer, who was videographing the impromptu press interaction of Shri Rahul Gandhi near the collectorate at Amethi.  Director (SPG) has also informed MHA that this position was conveyed to the personal staff of Shri Rahul Gandhi.  Dir (SPG) has confirmed that there was no security implication whatsoever. ” So, there is no letter, there is no complaint. Let me make it very clear that the obligation of security, especially, during election time and in particular for a SPG protectee is squarely on the SPG, on the security forces and ultimately in some sense on the MHA. I have no doubt that they are aware of their responsibility to discharge their duties as the ultimate protector just like they would discharge of every other SPG protectee, be it the Head of the Congress Party or the Prime Minister of this country or any other Head of any other party, who has SPG protection.

On Electoral Bonds, Dr. Singhvi said let me start by telling you very quickly, you have got our official statements on record about Electoral Bonds. More than two years ago or 2-1/2 years ago, I was myself part of the group which drafted the representation to the Finance Minister and to the Election Commission from the Congress Party saying this is cheating, this is fraud, this is facilitating unilateral contributions without transparency. 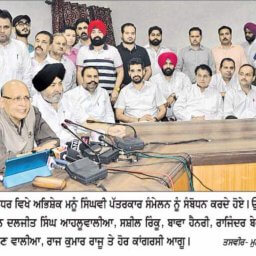